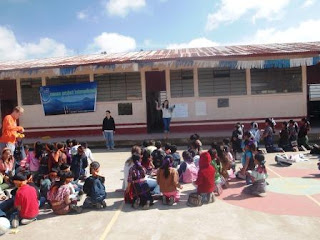 This Tuesday marked the launch of our summer camp "un viaje alrededor del mundo con Manna Project" (a trip around the world with Manna Project).  For six weeks, we will be leading 115 first through sixth graders from the Central primary school through educational activities in English, science, art, and sports, as well as community projects once a week.  Borrowed from everyone's favorite 90s game show, Legends of the Hidden Temple, the students are divided into four groups based on age: the Purple Parrots, Orange Iguanas, Green Monkeys, and the Silver Snakes.  While these groups have undoubtedly created enthusiasm among the kids, we seemed to have forgotten that the alliteration didn't translate (Silver snakes = serpientes plateadas, orange iguanas = iguanas anaranjadas... doesn't exactly have the same ring.)

Since this week's focus was North America, we kicked off yesterday morning teaching the kids about Halloween and having a bobbing for apples competition between teams.  The kids laughed and cheered as their teammates dunked their entire heads into buckets of water trying desperately to win for their teams.
Other highlights of the first week include: 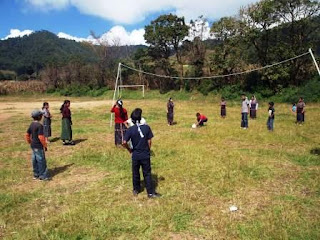 1) Karen's team of first through third graders chanting "monos morados" (purple monkeys) instead of their actual name, the loros morados (purple parrots).  Apparently they like alliteration too.
2) When asked "Who knows what continent we're on?" One little boy eagerly raised his hand and shouted "CHAQUIJYÁ CENTRAL!!!"  Other answers included Mexico and Spain.
3) Jared and Hudson acting as the kids' volleyball net after the school principal hid the actual net the day before to keep it safe.
4) A refusal by one second grader to make a dream catcher in art class because he swore he didn't get bad dreams.
After such a crazy first week, we can't wait to see what the next six week have in store.  Until next time!
Posted by Hudson at 11:46 AM