A Reflection on Cultural Exchange 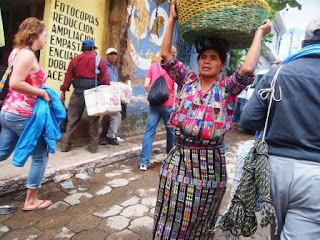 The bustling market. A steady stream of public transport buses. Mail and laundry services. Easy access to Panajachel. A soy store that sells delicious strawberry soy ice cream. These are just a few of the reasons for which I find living in Sololá, as opposed to Chaquijyá, to be very convenient. Though I may sometimes joke about the bother of not being able to find chocolate chips here, there’s no doubt that we have it good in this big town, and I am very grateful for that.
On the other hand, one of the greatest compromises that we have made by living in Sololá instead of Chaquijyá, at least initially, is that there is seemingly a limited amount of cultural exchange between us and the people we work alongside. Even though we go to the community several times each week, it is still difficult to appreciate the ups, downs, norms, and daily rhythms of life in Chaquijyá without actually living there. As a group, we have acknowledged this, and last week we were able to verbalize our concern over such narrow exchange with Esteban, the director of La Primaria. Esteban strongly agreed that up to this point, the cultural exchange that has taken place has been somewhat lopsided. For example, he noted that we teach English to students at La Primaria, but we have yet to take any formal lessons to learn Kaqchikel, the indigenous Mayan language spoken by many in Chaquijyá. Similarly, though people in the community have been kind enough to invite us to various celebrations and activities, such as Día de los Muertos festivities and graduation ceremonies, I still feel like our relationship and interactions haven’t delved much below the surface. 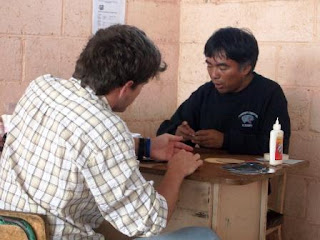 Sharing ideas, beliefs, and aspects of one’s culture generally seems to be easier in an informal and comfortable setting, such as someone’s home. So, in order to facilitate a greater exchange between community members and our group, we are hoping to arrange homestays in Chaquijyá for each of us early next spring. The opportunity to stay in someone’s home provides an avenue through which we can build confianza, or trust, with residents of Chaquijyá and establish relationships that reach beyond our professional interactions. In such an intimate environment, it would be much easier to establish a sincere friendship on which we can ground a cultural exchange.
Such a great opportunity for sharing exists, and I am very excited about the prospect of exploring and nurturing this cultural exchange. Personally, I would love to learn more about Mayan beliefs and rituals, speak enough Kaqchikel to have a two-minute conversation with someone, and develop a better understanding of the cadence of life in Chaquijyá. In return, we, will likely be some of the only foreigners that people in Chaquijyá will meet.  We can expose them to a completely different, less defined, culture and introduce the idea of diversity.  More expressly, because America is such a melting pot of peoples, races, customs, and beliefs, our culture is seemingly less simple to characterize. Even within our group of MPI volunteers here in Guatemala, we represent such varied parts of American culture, as we are from different regions of the country, hold different beliefs, etc. 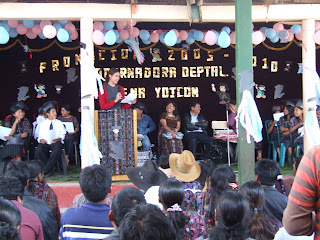 In the end, despite how different the customs and cultures between us and the people of Chaquijyá are, I believe that we will find commonalities that will enhance our relationship that much more.  For instance, discovering similar or shared family values will improve our bond and, in turn, probably our receptiveness to each other’s culture.  Thankfully, we have several more months to try to overcome any obstacles and really partake in a cultural exchange. I look forward to all that which lies ahead!
Hasta pronto,
Karen
Posted by Hudson at 12:24 AM