Bottles on the Brain

The term "Central American time" gets thrown around a lot. The usual context involves arriving at a meeting on time, only to wait two hours until your counterpart arrives unapologetic but ready to begin. So, you learn to bring a book and chalk it up to cultural differences, right? Well, in the past few weeks this concept has been thrown on its head. 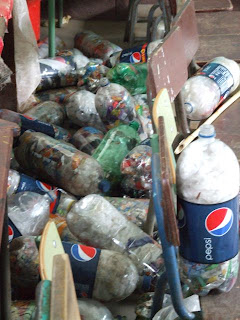 As you may or may not know, we've been in phase 1 of our bottle school project for months, over 6 to be exact. I could rattle off a long list of why this is, but I will spare you the details. Instead, let's talk progress and speedy progress at that.

At the beginning of last week, I walked into the La Primaría Central on a normal day, ready to teach some 4th graders English. As I walked down the row of classrooms, I saw that each was putting together an ode to the environment on a large poster board. My brow furrowed a bit, confused at the sudden adoration until I was finally introduced to the man responsible. Emerson was invited by our principal to more clearly show the relationship between our bottle project and the environment to the school's 275 students. The short version in case you’re interested—when all is said and done, our bottle school will remove about 13,000 pounds of trash from Guatemala's streets, rivers, and mountains. Emerson works for AMSCLAE, the Atitlan area's foremost authority on everything environmental, and now MPI Guatemala's newest partner organization! 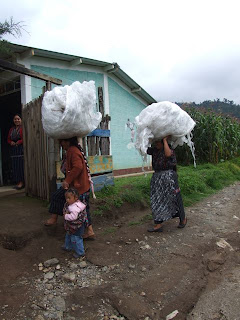 In the next two weeks, Emerson and I put together a presentation on our bottle project and gave it to over 450 people in 3 different assemblies reaching children, parents and community leaders. On top of that, we also had an architect in to draw the plans for the new second story, four-room addition. The kicker? I was taken to see the local kindergarten, and again, quite confused about the purpose of the visit. The director unlocked the first classroom and as the door swung open, stuffed bottles jumped out of the way. The room was entirely devoted to bottles, plastic, and bottle stuffing. Apparently for months now if you were a kindergartener, you participated in "stuffing time," requiring you to stuff plastic for 20 minutes at the end of recess each day. As if this weren’t enough, they also convinced Big Cola, one of Guatemala's largest soft drink producers, to donate their used plastic shrink wrap and discarded bottles to the cause.

I still carry a book just in case, but is it possible that Chaquijyá just reinvented "Central American time?"