Who will you vote for? 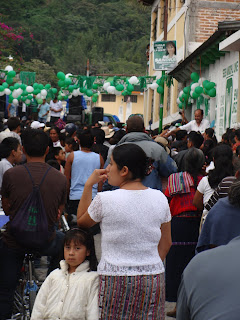 Though the 2012 American presidential election is still (more than) a year away, election season already is very much upon us. As a native Texan, I’ve watched Rick Perry’s campaign for the 2012 Republican nomination with relish. The man elicits strong reactions from Texans: some hate the man as much as they did his predecessor George W., while others attribute Texas’ relatively strong economy to Perry’s leadership. Either way, Texans have opinions about Perry, and they’ve expressed them freely and frequently in the past month.
And while Americans watch these elections unfold, most of us will limit our participation to just that: watching. Yes, we follow the major issues, discuss them with one another, and hopefully make an informed vote come November. But candidates expect little more than votes from the majority of us (that’s what matters in the end, after all).
It’s an entirely different scenario in Guatemala, where more than a dozen parties are represented in the elections taking place this Sunday. These parties come from all points on the political spectrum, from the radically leftist Frente Amplio to Partido Patriota, whose slogan “Mano Dura” reflects the party’s hard line against increasing criminal activity in Guatemala. Come November 2012, Americans will, for the most part, be deciding between the Republican and Democratic candidates. But election day in Guatemala is this Sunday, and while Perez Molina of Partido Patriota leads the polls by a significant margin, Guatemalans have myriad candidates from which to choose (unless Molina gets 50% of the vote this Sunday—which is unlikely—the country will hold a second round of presidential elections this November).
But while the entire country watches and waits for the results of the presidential election, Guatemalans are arguably more invested in local elections, which may be even more intense than the national ones. Here in Sololá, political parades, rallies, and caravans are such a normal feature of daily life that I can’t imagine the streets without them (though I’ll admit that I’m looking forward to the day when I don’t hear a remixed, political version of “Danza Kuduro” every fifteen minutes from my bedroom window). Pickup trucks, chicken buses, and tuc-tucs have all been converted to display political statements, advertising party colors and slogans. Processions make their way through town blaring campaign promises through loudspeakers. Personally, I’ve found the amount of community interest and participation in these elections to be astounding. Community members organize and attend political rallies and pass out flyers and bumper stickers. Furthermore, many of them know the candidates personally. For example, both of the schools with which we work have teachers that are running for office.
I can’t help but watch the campaign process in Guatemala and think, “so this is what democracy looks like.” Most of us know that George Washington himself condemned the two-party system under which we now operate in the United States; Guatemala’s multi-party system seems to encourage a level of community investment that just doesn’t occur in the states. Of course, that amount of participation has its dark side, too, and Guatemala isn’t always the safest place to be during the days following an election (don’t worry—we’ll be laying low for the next week). 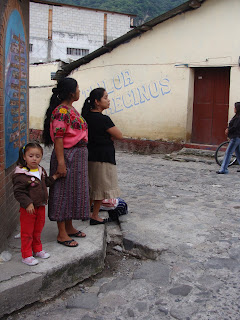 There exists a major disconnect, however, between election season and the years that follow the elections, during which time politicians in Guatemala very rarely follow through on their promises—not to mention the fact that political corruption runs deep in Guatemala, and that the country’s impunity rate is one of the highest in the world. And maybe that’s why Guatemalans have such strong opinions and so much invested in election results: there is still much work that remains to be done in their nation.
It’s a fascinating time to be living and working in Guatemala. We’ll keep you updated on the results of this weekend’s election and, if they occur, on the run-off in November. Stay tuned.
Posted by Kelsey at 11:12 PM