While students in the US are gearing up for the final push until the winter holidays, MPI Guatemala has commenced summer camp. This is the second year of summer camp, which runs three mornings a week for 5 weeks.  With only 2 PDs and a Country Director, the weeks leading up to camp were a flurry of successful recruitment that produced: Brendan, our new month-long housemate; and Roberto, a Guatemalan involved in our leadership course. We also recruited some part time help from Jared, an old PD; his girlfriend Sarah; and Jose, our favorite local English teacher.  Feeling more confident with 8 counselors, we began to plan themes and subjects for camp. Each week we are in a different ecosystem: desert, rainforest, ocean, urban, and artic. Every Tuesday the kids have science and art class. Wednesdays are then English and sports, and each Thursday is an all-camp activity.

Roberto asked to teach English, Cameron quickly claimed sports and Brendan was assigned science. Dana asked me if I wanted to teach art. This was definitely not because I was the only person left, but because she probably sensed my artistic creativity. I call your attention to Exhibit A.  Entitled Pu Pu Platter of Desserts, I made brought this masterpiece home in 3rd grade, and it has been featured prominently in my parents' house since. My mother, referencing the many layers of meaning in the piece, lovingly refers to it as the “PooPoo Platter.” Clearly I was up to the challenge. 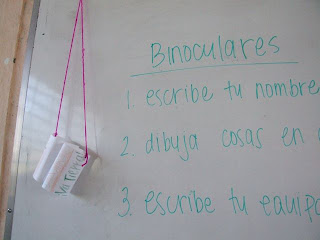 After an intense brainstorming session, I decided to get all my arts and crafts projects off the Internet. Why recreate the wheel when there are perfectly nice ones online? So during desert week, my first project was making binoculars, an essential desert tool that allows you to see some sand that’s far away as opposed to the sand that’s right under your feet.

I also got to lead the first Thursday all-camp activity last week. I made a treasure hunt for the kids that took them all over their community. The idea was that they were lost on a desert island without food or water and to get food and water (nutritious and filling candy and juice boxes) they had to follow all the clues back to the treasure. There were a few things that I had failed to anticipate for this hunt: 1) these kids obviously knew their community and all of its “shortcuts” like the back of their hands where as I was only familiar with the main road. 2) children run very fast and don’t like to be told to, “WAIT UP!” by the gringa wheezing 30ft behind them. I wish I could say I handled everything with grace like when we were running through a cornfield and the kids, matter-of-factly, told me, “Don’t speak or the dogs will get you.” However, I cannot. There was a moderate amount of panicking on my part throughout the entire race, which none of my male counterparts seemed to share. I don’t know why that was. The one thing keeping me going was my conviction that we were going to win. I had designed the hunt myself and there was no way that Roberto and Brendan’s team was going to beat Cameron and my team. Much to my dismay and consternation, we did not win. How did my team lose the game that I had designed you might ask? Well, it wasn’t my fault. Obviously, the other team cheated. 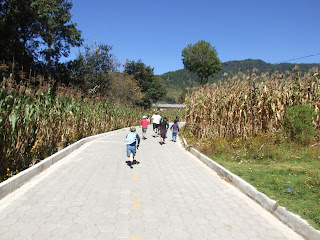 As our second successful week of camp draws to a close, I have begun to rethink career options. Is there such a thing as a professional summer camp counselor? While teaching during the school year is great, camp has proven even more fun and rewarding. All the kids at camp have signed up to participate and they genuinely want to be there, which is not always the case during the mandatory school year classes. These kids have made coming to camp a priority and fit their chores around it.  And while we are still teaching, the main objective is that everything is fun.  I just hope the kids are getting as much out of camp as I am.