Tell Me What You Really Think 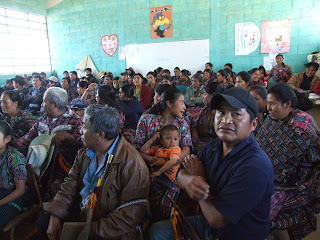 I attend general assembly meetings in Chaquijyá monthly to share with interested attendees MPI's current happenings and ask for suggestions and/or questions. Generally I get polite nods and blank stares, followed by an applause as I exit the stage. Today there are about 200 people, men, women and children, and most of them are talking all at once in everything from a whisper to a shriek. Yes, the meeting has started, but you wouldn't know it. I always wish I spoke/understood Kaqchikel, but now more than ever (although I'm sitting on stage wearing a shirt that says "peanut butter jelly time," so yes, I'm still thankful for the language barrier). Finally, the woman sitting next to me explains that they're fighting about a bridge that's being built. She tells me that two sectors--Saloj and Julajuj--do not want to support the project.

So it appears Chaquijyá is split into teams by last names, like color war at summer camp. In fact, in Chaquijyá, you have a team even before you have a first name. If it were real color war, the teams would go something like: green Gonzalez, silver Saloj, yellow Yumil, purple Palax... but I digress.

People are speaking on behalf of their own clan, and following each speech, ardent supporters yell "aye!" as I imagine people did when writing the Declaration of Independence. Then come the wave of "nays" as if we're talking about reinstating Prohibition.

What I've realized sitting here is that I want this. I want to talk about summer camp and hear a commotion brewing, I want to be berated with questions and concerns when I talk about teaching English, I want people to shout and scream, to aye and nay, to voice their opinion whatever it may be, because mainly I want people to care. Positive or negative, input means people care about the outcome, but it's easier said than done. You can't assemble a group of people and ask them to care, people need to choose to care on their own. So I will happily sit through these four hour meetings, understanding nothing, but happy hoping that with time they will yell at me, question me, and boo something I suggest... I'll also take positive feedback.

Do you have questions, concerns or feedback for us? Leave a comment!