As a Program Director, we are given freedom in creating new programs that will be beneficial to the community. For the past 8 months or so, I’ve been working on a health project focused on the production of homemade soap. This past Thursday, all of the hard work came to fruition. Let me back up a little to explain. 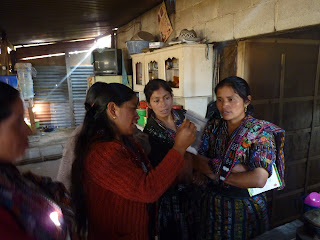 Manna Project Guatemala’s health program focuses on giving health talks to the students, focusing on themes such as personal and dental hygiene. One of the aspects of health we emphasize the most is the importance of washing one’s hands. Unfortunately, no matter how much we tell the kids to wash their hands, it is very difficult to follow through as there is a lack of soap in the school and the community. For whatever reason, the schools do not provide soap for the students to wash their hands. Seeing this, I came up with an idea. What if I could gather people from the community and figure out how to make soap cheaply and from commonly used items? This way, families would be able to have soap in their house, and would also be able to provide it to the school. Seemed like a good idea…but how does one make soap? 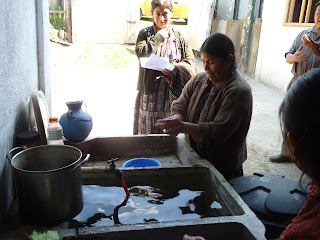 I started scouring the Internet for homemade soap recipes. The easiest ones I found involved mixing animal fat and caustic soda (available due to its use in the weaving community) with water to form a crude soap. At the same time, I met Francisco and his wife Candelaria, the local midwife, and pitched my idea. They seemed to buy into my theory and were willing to help me in any fashion. Off and on, for the next 7 or so months, I would pick up pounds of beef fat from Mario, the local Sololá butcher, and bring it to Francisco’s house in Chaquijyá. There, we would melt the fat and experiment mixing different measurements of caustic soda, water, herbs, leaves, and fruit juices to make the soap as refined (and pleasant smelling) as possible. Finally, we figured out a recipe that worked a couple times, and we decided to present it to a group of women in the community. I wrote up a bunch of recipes, separated measurements of caustic soda into bags, and presented to the women. After, Francisco and I gave a demonstration on how to make the soap. They seemed interested, engaged and excited that the soap was easy to make and worked well. 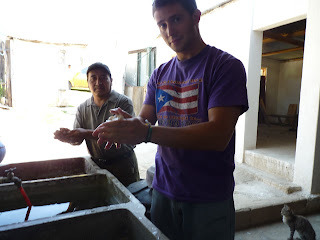 My ultimate goal for the soap project is to have women make the soap for their family, and in addition be able to sell it to the schools and in stores for a small profit. Unfortunately, we are only at Stage 1 right now, as the women have just begun making soap in their own households. Since I only have a short amount of time left in Guatemala, I don’t believe I will be around to see my vision fulfilled, however I hope that the incoming volunteers will be enthusiastic to help Francisco, the women, and continue this project.

-Cameron
Posted by Dana Zichlin at 6:41 AM