Independence Day is right around the corner (9/15) and it is a pretty big deal here in Guate. Decorations are being hung and flags are being attached to everything from buildings to the public buses/taxis/micros. Here, the schools are the center of the festivities. Each school has parties and parades for the children and families in its town. Cooperativa has been practicing for its parade for the past couple of weeks. Some of our English classes have been cancelled due to parade practice. It is still a little strange to me that parade practice takes priority over classes. We have been invited to participate in the parade and I am pretty excited! It is going to be a surprise because we have still not been told what to wear or what we are going to be doing.

This past week there have been other Independence Day-related activities at Cooperativa. On Wednesday morning we went to the school to see them choose the queen of the parade. I think that a girl from each class was chosen to compete for the title. The older girls did dance routines and each class did a little performance, many of which were Mayan dances and representations of Mayan life such as a wedding(see the 3rd photo!) 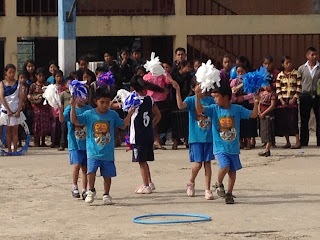 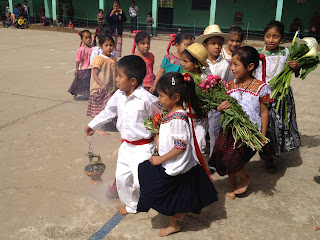 On Friday morning we went to the school to see the dance competition the winners of which would be performing at the school's party. It was a pretty big deal. I think there were over 40 different acts either dancing, lip-syncing, poem recitation, or singing. Each class had a dance routine. My favorites were 5th grade and the parvulos (preschool).

I am really excited to join in the festivities at both Central and Cooperativa next week. It will be another great way to interact with the community, make connections and learn more about their culture. Look for our post next week!
Posted by SMKauder at 8:57 PM