Yesterday was the last day of camp!  It was an eventful day because we had another guest visitor, Alberto, a friend of mine from Cuba who is a professional actor and artist.  He conducted two theatre workshops for the kids, first with the younger kids and then the older ones.  I was so impressed with how the students responded to the workshop because some of them are generally very shy and are hesitant to speak in public, but every single one of them participated, and it turns out that many of them are naturals!  In one of the activities the kids got to practice laughing and crying.  The sounds of laughter and sorrow filled the classroom as the kids poured their expression into the activity.

It was so fun to be able to share theatre with the students, as it was always a passion of mine as a child.  Being given the opportunity to express oneself in a forum outside of the real world is magical, and as Alberto told the kids, theatre serves many purposes.  Being able to speak in public is an important skill to have in many professions, such as being a teacher or a doctor, which many of the students hope to be. 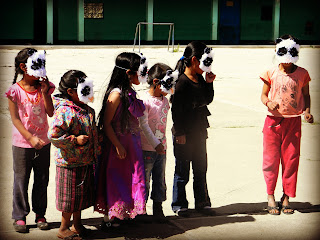 After the theatre workshops we had our closing ceremonies, and some of the youngest girls decided they wanted to perform a dance with the panda masks they made in art class.  The dance ended up being more of a swaying back and forth, but nonetheless, it was adorable and entertaining. 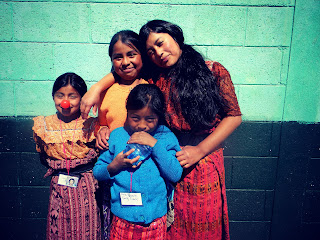 It was bittersweet to say goodbye to the kids, but we were all very excited to be finished with four weeks of camp.  It has taken a lot of work and energy, but it was a success full of many small moments of joy.