Laurie and George Take on Guatemala 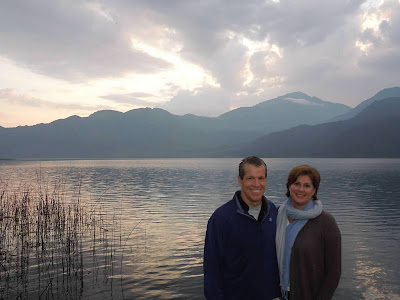 My parents came to visit me last week and as I awaited their arrival in the airport I silently prayed that Guatemala would be on its best behavior. I wanted my parents to love this country as much as I do. I was determined to show them the best of what Guatemala had to offer.


Flash forward to three hours into our trip and my parents, our luggage, and myself are hurling across a very choppy lake in the middle of a thunderstorm. My mother asks nervously if it’s normal for all the Guatemalans to be clutching lifejackets. “Yes,” I reply although I have never actually seen this before. My eyes wander the insides of the boat and I silently note that all of the life jackets appear to be in use. This boat ride would prove to be just one of many transportation glitches. It turns out that things that I consider to be fun and/or a luxury, such as riding in the back of  pickup trucks or taking tuk-tuks, my parents consider to be terrifying and uncomfortable…woops.

Transportation aside, one area of the trip that I managed to succeed in was the food. My dad likes to joke that trips are often planned from meal to meal. For example, at breakfast you would be planning what you are going to do for lunch and dinner. To me this is not a joke and it’s exactly what I do. Large amounts of my day would be consumed (pun intended) brainstorming our breakfast, lunch and dinner options. With my parents here, a slew of fancier restaurants that I had never experienced were now available to us. The trick was to fit them all into a week’s time and therefore much planning was required. 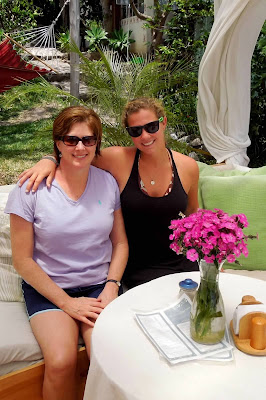 Neither of my parents speaks Spanish but they each developed unique approaches to dealing with the language barrier. My mother has a great aptitude for language and within an hour of being here could use her knowledge of French and Italian to figure out much of the conversation I was having with the shuttle driver. I found this immensely annoying since it had taken me a solid eight months to get to this point. She was supposed to be gaping in amazement as I talked logistics with the driver not following along with the conversation. So my childish jealousy was delighted a few days later when my mother proclaimed to our boat driver, “Mucho gusto tilapia!” She had wanted to say that she liked tilapia a lot and she was actually quite close, but her sincerity in being pleased to meet the fish was priceless. After that my mother stuck to mostly greetings and thank yous, but could still impress us with her ability to read Spanish menus and signs.

My father also speaks French, but he decided to utilize his knowledge of the language in a different way. He rationalized that since French and Spanish are closer than English and Spanish he would simply speak French to anyone and everyone for the week. While his theory was sound, it did not work very well in practice. Many Guatemalans, especially people working in the tourist industry, have some basic knowledge of the English language. This is not the case for French. However, my father would hear none of this talk and continued his French as though it were the most natural thing in the world. I do have to give him some credit, though, because he managed to get around a bit by himself.  How he managed to negotiate a cab ride alone remains a mystery to me. 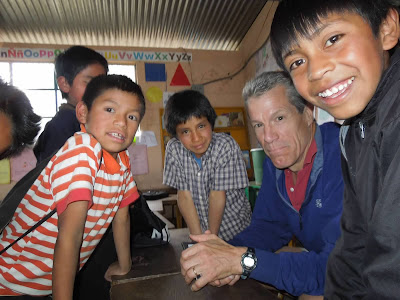 I brought my parents to school with me one afternoon so they could witness my impressive teaching skills and meet my students. My mother, wanting to document this event, began snapping away. The kids at school love getting their picture taken, but what they love even more is getting to look at the picture afterwards and then asking for fifty more pictures. The class’s attention disintegrated as all the students left their desks and huddled around my mother. Embracing his rediscovered French roots, my father, filled with ennui, whipped out his Kindle to pass the time. With the addition of a second electronic device, English class had turned into show and tell. Helpless against the pull of these strange, new people with their cool electronics, Lorena and I decided the students were probably prepared enough for their test.

Overall it was a great week with my parents. Did everything go according to plan? No. Did I remain cool and collected when it didn’t? Again, no. Cam has this impression that he does of the girls in the house when we are freaking out over something relatively unimportant. It involves him speaking in a Muppet voice and overreacting a lot. It is alarmingly accurate. Panicking aside, we still managed to have a great time. My parents were good-humored and able to roll with the punches even if I was not. It was rewarding to share just a few of my experiences in Guatemala with my parents and I believe they left reassured that I am safe and happy here.