The Perfect Ending to an Unforgettable Trip

Last week we celebrated Día del Maestros at Cooperativa. The kids all made up dances and performed them in front of the teachers. We had the privilege of sitting on the raised area with the rest of the teachers of the school overlooking the area where the students were performing. It was a great honor and feeling that they considered us just as important as the teachers working at the school. It was also amazing getting to watch my students perform and scream out our names to make sure we were watching them. To know that we have formed relationships with the kids that is more than a teacher student relationship is pretty awesome. 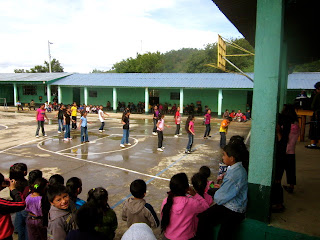 This past week our computer class was an absolute knock out. We took the women to an Internet café nearby and taught them how to use the Internet for the first time. It was truly an eye-opening and rewarding feeling getting to introduce them to such a foreign experience. Watching them as they “googled” their hometowns and could look at images of where they lived. They were absolutely astounded by the things they could do and the new world they had been introduced to. It was a moment where I realized why I’m really here and the impact I have been able to make in my two-month stay in Guatemala. A moment I will not forget.

As the days pass, my last week has quickly approached. It is difficult to think of life back in the States because it is so foreign to the life I have become accustomed to in Guatemala. I have made friendships that will last forever; hopefully touched some lives along the way, and have been forever changed because of this experience. I have formed a love for the country and its people that I was not expecting to carry away. So, I depart not by saying goodbye, but see you later Guate.

-Kathryn
Posted by SMKauder at 9:01 PM