Well, I have to say that choosing photos for this Sunday Snapshot may be one of the most difficult tasks I've faced since arriving here... ;) We have so many photos from the weekends' festivities!

Even though Independence Day is the 15th, the real celebrations began the afternoon of the 14th. We spent Friday afternoon/evening with Central. We spent Saturday morning with Cooperativa, and then returned to Central for lunch and more festivities! I'll do my best to weave together a fairly concise story of Friday & Saturday.

First, the stage we helped decorate at Central Friday afternoon. They actually built the whole thing Thursday. Super impressive!
Throughout Friday (and Saturday), there was a steady stream of Marimba:

The evening began with the Básico (middle school) students running in with torches. Similar occurrences happened all evening... We never figured out the story behind it, but nonetheless it is an Independence Day tradition. 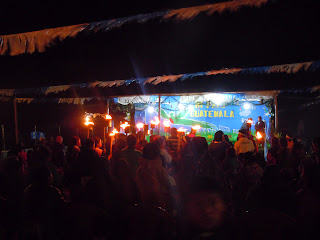 The school selects a few "niñas" (girl) or "señoritas" to represent them. The classes of the selected candidates put together a dance, usually Mayan-based, to present the niña to the community. Below is an example of such a presentation. The niña was in the middle placing the apples in the shape of a cross. 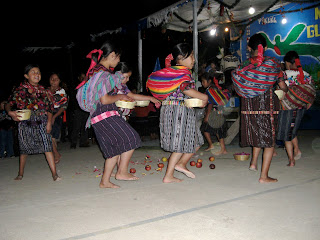 After the presentation of the niñas, groups of students do additional presentations. These include dances or fake singing/playing instruments. However, one group of the oh-so-cool 8th grade boys actually had their lead man sing for real. I won't forget that moment... and I'll make sure they won't forget it either ;) 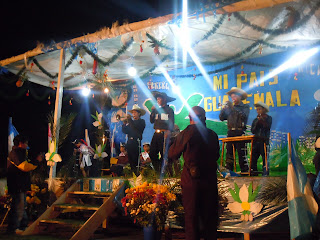 Fast forward to Saturday morning. We participated in a parade with Cooperativa, which began up in the mountains. 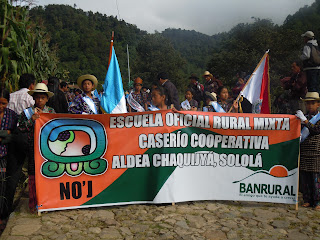 We paraded to the school, where each class did a short presentation. The ranged from typical Mayan to intense modern choreography:

After watching the presentations and enjoying a delicious snack, we headed back to Central. Only minutes after arriving, Bayron the PE teacher at both schools put Jess on the spot and asked her to say a few words.

We arrived in time to see the last two performances from the 7th graders. Fortunately, our básico kids did a few stunts of their own. 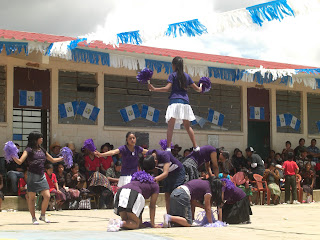 We enjoyed a nice lunch with the Padres de Familia (PTA) and spent the rest of the afternoon sweating and watching lots of soccer games.

All in all, it was an amazing experience! We are thankful to both Central and Cooperativa for being so welcoming and inviting!